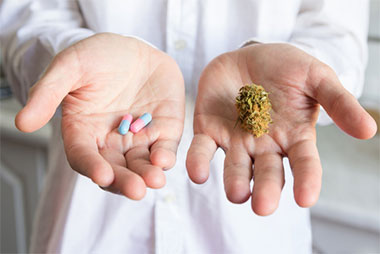 While cannabis has been used for years by the medical community for treating various conditions, a recently published study puts the spotlight on medicinal cannabinoids as a candidate for treating the symptoms of multiple sclerosis (MS).

MS is a neurodegenerative disease of unknown cause that can affect a person’s brain, spinal cord, and eyes. The immune system attacks the protective outer shell of the body’s nerve systems, and eventually, a person’s nerves can become permanently damaged. As MS progresses, the brain can no longer use the nerve fibres to properly transmit signals throughout the body. Patients suffering from MS will have mild to serious symptoms that can affect, vision, speech, voluntary movement, balance, muscle control and body functions. Patients may also experience tiredness, depression, and physical pain. Symptoms vary and can either worsen or improve (with possibilities for relapse) over time. While there is no cure for MS, there are many new treatments available that can alleviate and slow the progression of symptoms.

The study described in the article Assessment of Efficacy and Tolerability of Medicinal Cannabinoids in Patients with Multiple Sclerosis (by Mari Carmen Torres Moreno, Esther Papaseit, Marta Torrens, and Magi Farré) involved a review and analysis of 17 random clinical trials that included over 3000 patients that compared the effects of medicinal cannabinoids with a placebo in managing pain and discomfort associated with spasticity (stiff or tight muscles), pain, and bladder dysfunction.

While the study of pain management in MS continues to need further research, ultimately, medical cannabinoids were found to be effective (albeit limited in individual form) in the treatment of spasticity, pain, and bladder dysfunction. After this study, therapy for MS that includes the use of these drugs can be considered safe, since there were no adverse or severe complications. The results of the study also encourages using medicinal cannabinoids in combination with other therapies.

Overall, it is clear from this study that medicinal cannabis is of great value to the medical community due to its ability to allow those who suffer from potentially debilitating conditions to manage their pain and improve their lives.

Do you have your own experiences with Medical Marijuana and have thoughts about how it could benefit patients with Multiple Sclerosis?

Categories
Archives
Canadians have the right to quality healthcare. Together we can break barriers to access for all.